From January 23-26, 2013, the 33rd Annual EcoFarm Conference took place at Asilomar Conference Grounds in Pacific Grove, CA. Our perennial gathering is a place for people farmers, distributers, and all people who are involved in the food system to assemble and recharge for the year ahead. This year, over 1,600 people gathered there. The beachside setting was a perfect place to contemplate the power and importance of water.

There were five workshops that focused explicitly on water at the conference; 119 people attended these sessions combined. There were two sessions that featured EFA’s own Water Stewardship Video Case Studies. All of these workshops were part of a track funded by the California Depart of Food and Agriculture.

In addition to those sessions, three other workshops focused their attention to water. The first of these was called “Pajaro Community Water Dialogues: A Model for Collaboration,” a project which was also featured in the Water Stewardship Project (WSP) video on precision irrigation.

The second workshop was called “Approaches to Dealing with Problem Water for Organic Farmers.” This workshop brought in a technical perspective, explaining how ionization can be used to neutralize the effects of waterborne contaminants, enzymatic cleansing of drip irrigation systems, and other organically approved methods for reducing salinity and pH.

The third workshop delved into an up-and-coming sector: “Working Landscapes for Water Storage.” This is an area that current and future on-farm water stewards will want to watch in the coming years. The California Roundtable on Water and Food Supply released an excellent report in November on the topic, which provides a great primer. The report defines water storage as:

“We define storage as processes that retain water in order to maximize its availability at the times and places it is needed. Storage functions to elongate the availability of precipitation through time and optimize availability over the lengthy dry season; as such, retention of water in the landscape must be a key guiding concept in our approach to storing water.”

Another workshop offered was on the New Ag Order. In 2012, the Central Coast Regional Water Quality Control Board approved The Agricultural order—a conditional waiver of waste discharge requirements for discharges from irrigated lands in the Central Coast region.

All of the workshops provided attendees with the chance to learn about water from a wide array of perspectives. In addition to the workshops, the EFA Water Stewardship Case Study videos were playing in the Exhibitor Marketplace during the whole conference. All of these efforts combined allowed agricultural water stewardship to be a highlighted aspect of the conference! 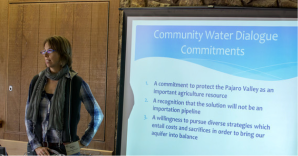 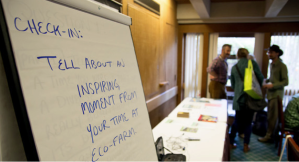 About the Water Stewardship Project

The Ecological Farming Association's Water Stewardship Project provides education and outreach materials about implementing on-farm water conservation measures. This project is funded in part by a grant from the California Department of Food and Agriculture.
Click here to learn more.